Benchmark indices were dragged down by profit booking on May 21, a day after clocking strong gains on the back on exit polls for Lok Sabha Election 2019.

All the sectoral indices ended in the red led by auto, bank, pharma, energy, infra, metal, energy and IT.

After a sharp up move yesterday, the Indian benchmark indices witnessed profit taking at higher levels due to nervousness amongst market participants ahead of the actual election results. The Nifty index witnessed selling pressure throughout the day as it ended with losses of ~1% at 11,709 levels, said Jayant Manglik, President – Retail Distribution, Religare Broking.

“The broader market outperformed the benchmark with BSE Midcap and Smallcap ending with losses of 0.9% and 0.6% respectively. Amongst the sectoral indices, except consumer durables which ended with gains of 0.7%, all the other sector indices ended in red with auto, banking and metal being the top losers, he added.

We have collated 15 data points to help you spot profitable trades:

Maximum Call open interest (OI) of 36.19 lakh contracts was seen at the 12,000 strike price. This will act as a crucial resistance level for the May series.

Maximum Put open interest of 17.60 lakh contracts was seen at 11,500 strike price. This will act as a crucial support level for the May series.

Stocks with a high delivery percentage

A decrease in open interest, along with an increase in price, mostly indicates short covering.

An increase in open interest along with a decrease in price mostly indicates a build-up of short positions. 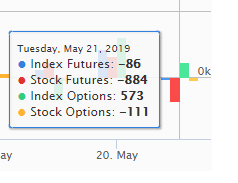 Selan Exploration Technology: Board meeting on May 29 to consider and approve the financial results for the period ended March 31, 2019

Adani Power: Board meeting on May 29 to consider and approve the financial results for the period ended March 31, 2019 and other business matters

HCL Infosystems: Board meeting on May 30 to consider and approve the financial results for the period ended March 31, 2019 and other business matters

National Fertilisers: Board meeting on June 4 to consider final dividend for the financial year ended 31st March, 2019 and Closing of Trading window.

V-Guard Industries: Board meeting on May 29 to consider and approve the financial results for the period ended March 31, 2019, dividend, Fund Raising and other business matters

For May 22, Adani Power, IDBI, Jet Airways and Reliance Capital are under a ban. Securities in ban period under the F&O segment include companies in which the security has crossed 95 percent of the market-wide position limit.